Check back here for details of upcoming shows 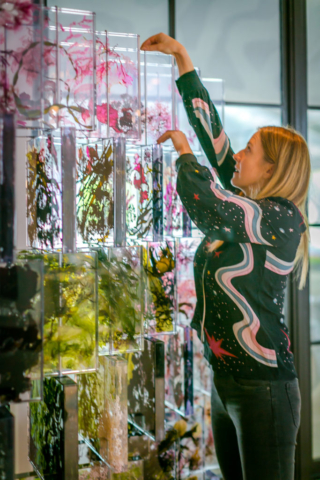 I spent many years looking at seaweeds and have often been asked to do commissions inspired by the sea but I’ve always been very wary of it. I struggled to see how can you reinterpret the mystery of the sea, and those materials associated with the sea, in a new and dynamic way.
When I started on the full Gyre series, I decided the way to do it was to do something on a really huge scale. The idea of a gyre really worked for me because it implies uncertainty as well as creating a physical dynamic with the sense of kinetic
that is the moment where things are kinetic, in a swirl.

The deep sea is terrifying to humans, and I wanted to get that across in the piece as well as the beauty. Seaweeds naturally express that because there’s so many that are so dark and alien but there are also some very delicate and beautiful seaweeds, and I have explored an array of colours from the greens through to the browns and reds. The colours tell their history because the reds are the deep sea macro algaes that developed first; the browns are the next stage and the greens are developed much later on and relate more to the plants that we have today on land.
Working with seaweeds was very different to working with plants. The red seaweeds are so delicate and thin that it took many months to figure out how to capture them and dry them and pour the resin around them without damaging them.
Seaweeds are very sensitive so even the conditions on the day you collect them and dry them makes a difference.

The fabricating of a large piece like this bridges the gap between art and design. With art you’re creating the work as you’re doing it whereas with design you tend to design it and then make it. Gyre is a really good example of where I’ve done both.
Once I had collected all the samples I spent a week working from eight in the morning till midnight, laying it out with the seaweeds on paper on the floor in the kitchen while my family were away on holiday.
As I laid it out, I was working it and changing it and moving it and changing it and trying to get the right piece as a composition. And then I sliced it all up into the individual panels and I laid it all out in what would become the individual panels, and then cast them in the studio in sections. By that stage you’re working with something that is basically a design and the changes are just tweaks.